With winter approaching the City has updated our plans for snow removal. Our goal is to achieve a more coordinated and efficient response to remove snow and improve public safety.

Your help keeps snow removal costs down. We need your help to:

What is Snow Removal?

“Snow Removal” means the full task of performing all three of the following phases to remove snow from a location: Plowing, Clearing and Hauling, to clear a location of snow as completely as possible within reason.

“Plowing” means using the blades of city equipment to remove or level some of the snow in a location to create passable lanes for traffic, but not always clearing it to the pavement or creating a windrow; this is generally the first stage of Snow Removal.

“Clearing” this is clearing a location of snow down to the pavement level where possible including moving snow into windrows where needed; this is generally the second stage of Snow Removal.

“Hauling” means the act of moving snow from one location (such as a road or sidewalk or windrow) to a different location; this is generally the third and final step in Snow Removal and often includes using the City’s snowblower to blow snow into trucks to be taken away.

Priorities for Plowing and Clearing roads are established with the intent to provide the greatest benefit to the majority of the travelling public, and consider factors such as traffic volumes, emergency services routes, and road classification. The following priority areas for plowing and clearing are indicated in the Appendix A map below:

Arterial and Emergency Services: As shown on the map, Priority 1 includes all roads determined as main routes for access to the Hospital, RCMP Detachment and Fire Station.

Schools and Downtown: As shown on the map, Priority 2 includes roads determined as main routes for access to schools, and local businesses, including the remainder of the downtown core and service roads.

Primary Residential and Industrial Roads: As shown on the map, Priority 3 includes all paved residential through roads not already included in Priority 1 or 2, as well as the industrial business area.

Local Residential Roads: As shown on the map, Priority 4 includes all remaining residential roads that serve local traffic only, including crescents, cul-de-sacs, and streets East of 3rd Street East. 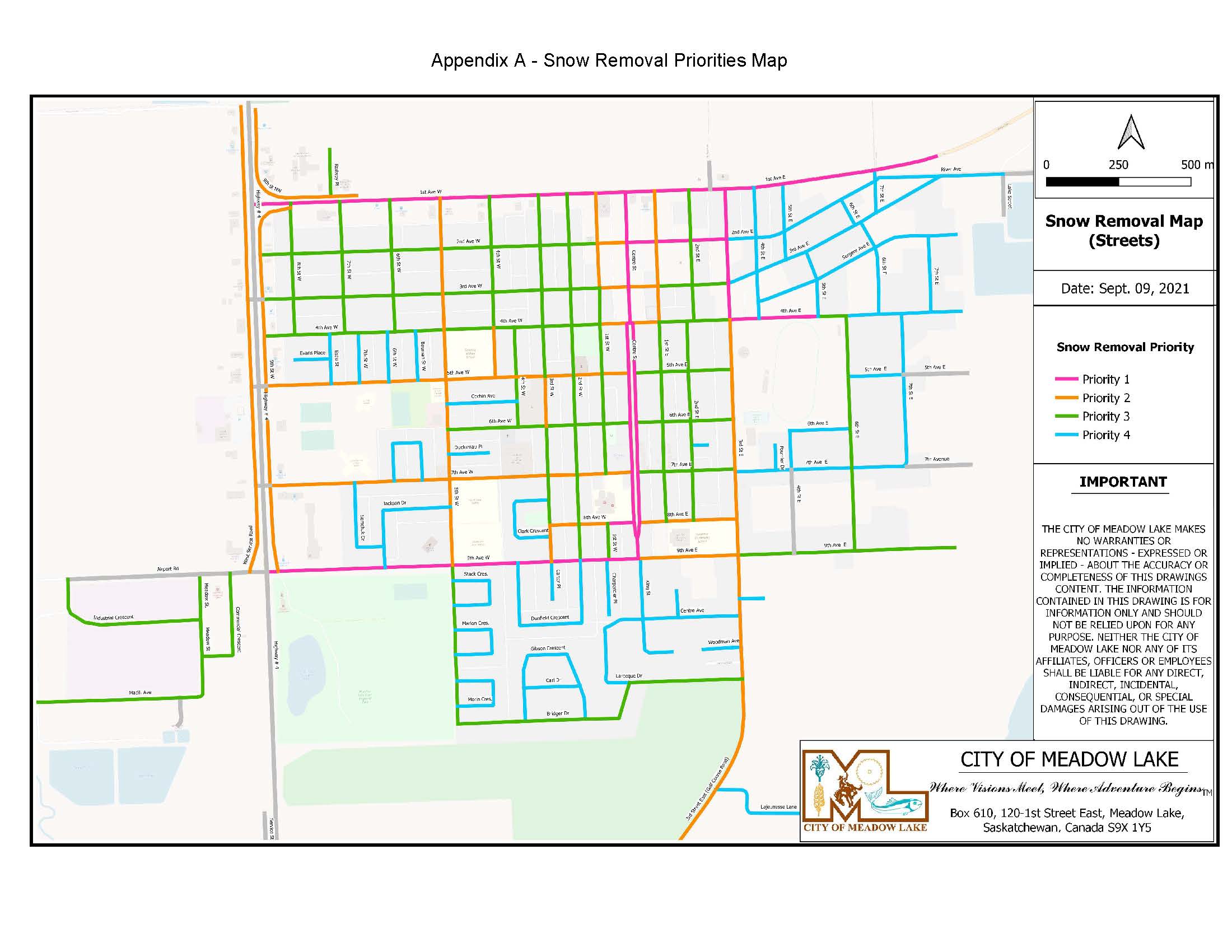 With the exception of certain designated alleys (see Appendix B) which are generally lanes and alleys behind apartment / condominium complexes that do not have street access, and alleys/lanes that need to be cleared at the city’s own facilities, back-alley Plowing is generally not performed at any time during the winter months.

Alleys may be Plowed where conditions are deemed warranted at the direction of the Public Works Manager, but there is no guarantee for this work. Alleys are generally Plowed after Snow Removal on roads, or at the same time as the neighbouring roads are being Plowed at the direction of public works. Snow Removal requests for Back Alleys/Lanes must be requested using the standard Service Request system through City Hall, with the requestor providing justification of where and why the Snow Removal action is needed. The Public Works Manager will deem whether the work is warranted or possible. Removing windrows and hauling away snow may not always immediately follow the plowing and clearing phases of snow removal. Equipment availability, timing and road widths must be taken into consideration.

Due to the narrow widths of the below roads, the City will be performing all stages of snow removal consecutively when it is their turn for snow removal as per the City’s priority routes. These roads will have “no street parking” signs put out 24 hours before snow is plowed, cleared and hauled away. It is advised to pay attention to these intersections after a snow event so snow removal can happen as quickly as possible. No street parking notices are also made using our VoyentAlert! system.

Due to traffic congestion and on-street residential parking, Snow Removal for the above roads will typically be performed after 9:00 a.m. 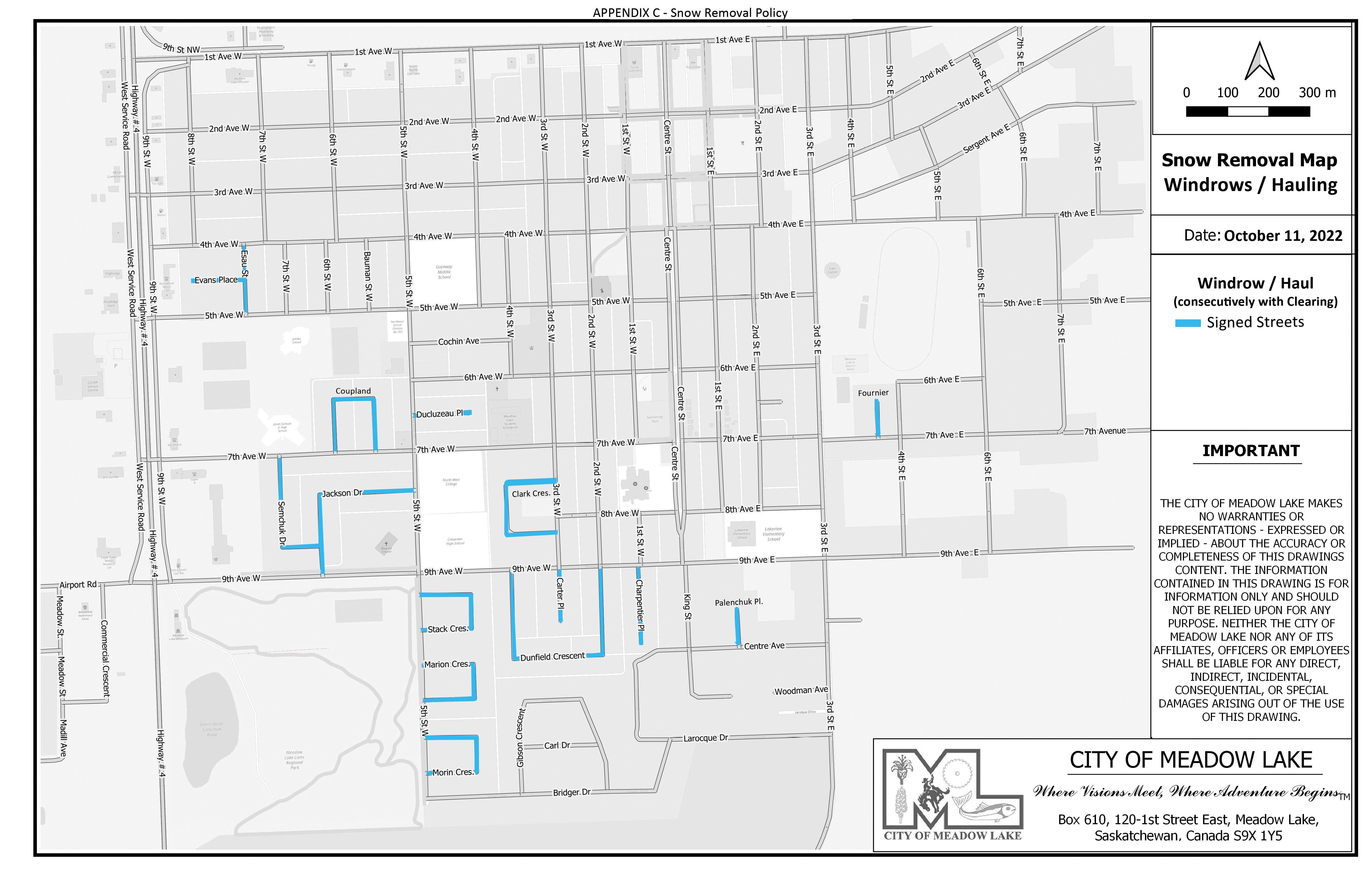 Q: When will the City plow my road?

Q: Do I have to move my vehicle off the road during snow removal? How will I know when it needs to be moved?

Q: What happens if I have a driveway ridge that makes it hazardous to get in and out of my property?

Q: Will my back alley be cleared? Why doesn't the city clear ALL back alleys?

Q: Why doesn’t the City remove ridges in front of driveways or clear back alleys? Owners/Occupants along newly designated School Zone Collector Roads (see the Schedule B map below) are now required to perform snow removal on the sidewalk (where one exits) immediately adjacent to their own property only. You are not required to cross the street to shovel the sidewalk in front of someone else’s property. Where the new *ASPHALT* section of the Walking Path is adjacent to properties in this zone, those properties do not have to shovel it. Parks & Recreation staff will be doing snow removal on the ASPHALT sections of the walking path in the city (see the Appendix D map below).

Bylaw Enforcement has been instructed to perform "soft enforcement" for this first season of the new change (2022/2023 winter). This means they will issue a warning for a first offence before issuing a fine or an Order to Remedy. The fine for a first offence is $25, and for a second or additional offence it is $50 per offence. In addition to a fine, the City can also issue an Order to Remedy for the work to be done. If the owner/occupant fails to comply with the order, the City may have the work done, billing the cost back to the property owner. Bills that go unpaid may have the amount applied to their property taxes.

See our the FAQ section below for more information. Q: Why isn’t everyone required to remove snow on their sidewalks? Why just a designated zone?

Q: Will the City be clearing sidewalks in front of their properties too?

Q: Who clears the sidewalks in the City that aren't along School Zone Collector Roads and aren't cleared by the City?

Q: I have a rental property. Who has to shovel in front of that place?

Q: What happens if I don’t clear my sidewalk?

Q: My property is along the walking path, do I need to clear the snow?

Q: If I can't clear my sidewalk, where can I get help?

Q: How can I help those in the community who are unable to shovel their sidewalks? Q: What does Snow Removal mean? Why are piles of snow left in the street?

Q: How does the City determine levels of service standards and priorities?

Q: What can I do if I don't agree with the way the city does snow removal and would like to see it changed?

Q: What sort of timeline is "following a snow event"?

Q: I have flower pots, a driveway ramp, and other landscaping items that are in my yard but on City property. Will they be safe during Snow Removal?

Q: Where do I put the snow I'm clearing from my driveway or sidewalk? Landscaping, shrubs, fencing, ornaments, flower beds, ramps, etc: Any landscaping, trees, shrubs, plants, fencing, ornaments, flower beds or any other structure or material that is above the normal grade of the lot and is placed between the curb and the front lot line of the owner's property is placed at the owner’s risk. The City will not be responsible for any damages to property within the municipal right-of way caused by the grading or pushing of snow during snow removal.